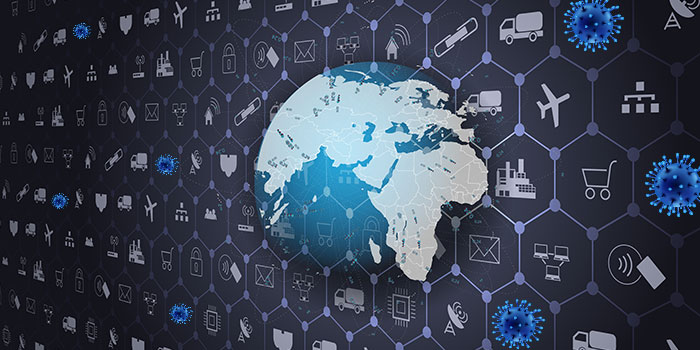 Covid-19: How To Manage The Supply Chain Risks

Centralised supplier management provides better insights into supply chain risks and reduces the chances of an organisation scrambling in the event of a pandemic.

The impact of Covid-19 on the global economy is unprecedented, its ultimate outcome still unknown and unpredictable. It started as a small, localised outbreak of a rather virulent and severe flu-like illness in one area of China in late 2019 and spread quickly, infecting hundreds of individuals and causing the Chinese authorities to lock down first the city of Wuhan, then the whole of Hubei province – and then, it seemed, the whole of China itself.

Factories were closed, workers were ordered to stay home, and transport and travel in and out of quarantined areas came to a standstill. Even the air, usually heavily polluted as a result of China’s heavy industrial activity, cleared. The Chinese manufacturing behemoth had been brought to its knees, not by an anticipated trade war with President Donald Trump’s America, but by an organism that could only be identified under a microscope.

And suddenly, the effects were being felt around the world as supply chains rooted in China dried up. By mid-February, Forrester Research estimated that 94% of the Fortune 1 000 were experiencing coronavirus supply chain disruptions.

Worse was to follow as Covid-19 spread to other countries.

A report compiled by Resilinc, a supply chain mapping and risk-monitoring company, in early March revealed that at least 1 000 of the world’s largest companies or their suppliers own more than 12 000 factories, warehouses and other operations in the quarantined areas of China, and to a lesser extent in northern Italy and South Korea, which were also in quarantine.

Still the virus continued its remorseless journey around the world, with cases identified in more than 100 countries, including SA. Finally, on 11 March, the World Health Organisation finally declared the spread of Covid-19 a “global pandemic”.

Markets went into freefall, the rand nosedived, airlines grounded their aircraft, and luxury cruise liners, having offloaded their quarantined passengers, returned to port and stayed there. Hotels emptied around the world, working from home – previously unheard of in economies like China and Japan – became the norm and business, cultural and sporting events in more and more countries were cancelled or postponed indefinitely. The wheels of commerce and industry began to grind to a halt as the manufacture and movement of raw materials and components dried up.

“The supply chain crisis hasn’t only affected those who source their requirements directly from suppliers in the worst affected areas like China, Italy and South Korea,” says Denis Bensch, CIO of FlowCentric Technologies.

“In many instances, those who might have believed they would be spared the worst of the disruptions because they source their products locally or from suppliers in (so far) unaffected geographical regions, are finding that they are not immune. They too are being affected by the pandemic, discovering just how many of their second- and third-tier suppliers are based in the affected regions."

According to Bensch, companies whose supply chains are most at risk are those who rely largely on a single supplier from whom they purchase directly.

“The risks of this supply chain strategy are well known. Weaknesses and broken links in the supply chain became painfully obvious to many companies after the March 2011 earthquake and tsunami in Fukushima, Japan,” he says.

Other major incidents which have affected global supply chains, as highlighted in Resilinc’s 2017-2018 EventWatch report on the most disruptive events for business, include natural disasters such as extreme weather events and the February 2018 Taiwan earthquake. The top five of these events together affected over 24 000 supplier sites, with recovery times taking between 19 and 25 weeks.

Nevertheless, the most serious risk to business and the supply chain, according to the EventWatch report, was mergers and acquisitions, followed by factory fires/explosions, management change, and factory shutdown or disruptions. Natural disasters in the form of extreme weather, cyclones and earthquakes were in the middle of the watch list, while human health was right at the bottom: barely a blip on the supply chain alert radar.

Many companies might have prepared supply chain management plans to take account of disease-based supply chain disruptions following the swine flu (H1N1) virus outbreak of 2009, but these have mostly been gathering dust on some long-forgotten shelves, and are unlikely to be agile enough to address the disruptions caused by the pandemic.

That’s not surprising. No one appears to have anticipated an event as widespread and disruptive as Covid-19; not even the World Economic Forum (WEF), which, in its 2019 Global Risks Report, questioned whether the world was “sleepwalking into a crisis”.

The WEF’s report focused on “geopolitical and geo-economic tensions” that were affecting trade and investment, such as the trade uncertainties between the US and China, and between the UK and Europe. According to the report, we are entering a time of economic instability, with the operational challenges facing global companies negatively affecting margins and slowing or ending growth plans.

But as Renee Murphy, Principal Analyst at Forrester Research, points out in her March 11 report “Coronavirus and Climate Change Reveal Systemic Risk for Third Parties”, the coronavirus pandemic is really “old news”.

“Replace the coronavirus with SARS, MERS-CoV or even the avian influenza, and you have the same basic story. A specific region that typically serves as a manufacturing and supply chain hub sees a mass outbreak of an epidemic virus. The virus inhibits production lines and manufacturing slows to a halt. Then the virus itself and the economic implications it causes join forces to create a global panic. It’s a tale as old as time; you might even call it systemic risk related to supply chain and third parties,” Murphy writes.

She maintains that based on the historical evidence; China is likely to continue to be the source of the very risks that are affecting the world today. “Companies that are not classifying and addressing this risk proactively will be faced with identical issues in five years... or even before the next pandemic strikes,” she adds.

FlowCentric Technologies’ Bensch agrees, pointing out that supply chain managers know the risks of single sourcing. However, they do it anyway to secure their supply, meet a cost target, or simply to avoid the administrative nightmare of managing additional suppliers. The unfortunate reality is that even usually dependable suppliers are not immune to the effects of disease, natural disasters or the increasingly dire effects of cyber-attacks, political unrest and economic instability.

A knee-jerk response to each crisis is simply not practical. All too often, companies over-diversify after a crisis, only to seek opportunities to consolidate their suppliers once the panic begins to fade… until the next catastrophic disruption, when the cycle starts all over again.

Naturally, there are costs associated with being proactive and diversifying the supply chain. For example, multiple sourcing requires qualifying suppliers and sites in different countries, onboarding them, and managing them in the long term. However, leveraging the right supplier management technology goes a long way towards lightening the load. Centralised supplier management provides better insights into supply chain risks and, when correctly managed, reduces the chances that an organisation will be left scrambling if a source experiences the effects of something like the coronavirus pandemic.

The initial time and costs required to implement a supplier management system may seem daunting acknowledges Bensch, but the investment is offset by savings in the form of reduced reliance on inventory, manual processes, and people — and a fast, responsive, and agile supply chain that remains operational, despite all the things that can and do go wrong when one least expect it, Bensch concludes.

Looking to improve your Supplier Management processes?
Contact us to find out how we can assist you.